BLOG: ORE Catapult predicts 2022 is the year of tidal

BLOG: ORE Catapult predicts 2022 is the year of tidal

ORE Catapult predicts: 2022 is the Year of Tidal

There is no denying the potential of tidal stream energy (capturing the power of the tides using seabed mounted and floating turbines). This technology, being pioneered in the UK, received a significant boost at the end of 2021 when the UK Government announced a dedicated tidal stream allocation under its Contracts for Difference (CfD) scheme*.

Tidal stream technologies are well proven and are now on the cusp of commercialisation, offering a predictable renewable energy source that can cover fluctuations in power from other renewable sources and supply 11% of the UK’s electricity. Easily transportable and deployable turbines also offer a way of increasing access to energy and tackling fuel poverty in remote and island communities across the world.

With the most advanced technologies home-grown in the UK, tidal stream offers an important first-mover advantage to the UK economy too. The costs of tidal stream energy are forecast to drop below £90/MWh after the first 1GW of deployment, potentially creating a £25bn UK export opportunity by 2050 and 26,600 jobs from tidal stream and wave energy by 2040.

Who are the ‘Tidal Pioneers’?
At the end of 2021, ORE Catapult held a series of virtual events called the Tidal Power Express, where leading UK developers Nova Innovation, Orbital Marine Power and SIMEC Atlantis provided virtual tours of their technologies and sites. 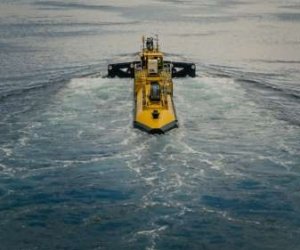 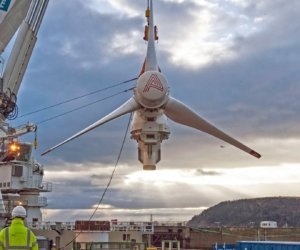 The timing couldn’t have been better for the first of our events, held on November 24. That very morning, after months of lobbying by the marine energy sector, the UK Government confirmed it would provide ring-fenced funding to tidal power under its CfD scheme, effectively opening up a route to market in the UK. We welcomed this news, estimating that, depending upon the prices bid by project developers, it could enable deployment of up to 60MW of tidal stream capacity in UK waters between 2025 and 2027.

Going into 2022, with the focus keenly on the cost of energy in the UK and the need to diversify our energy mix, the CfD announcement also provides the confidence that private investors need to back larger-scale tidal projects.

In the final discussion of the Tidal Power Express series, Andrew Scott, CEO of Orbital Marine Energy (the creators of the world’s most powerful tidal stream turbine, the O2) commented that the CfD announcement is “hopefully only the starting gun of what’s going to be the industrialisation of tidal energy”, echoing an industry opinion that this will pave the way for even more capacity in future allocation rounds and kick-start the UK tidal stream industry in a global sector with enormous potential.

Eileen Linklater, External Relationship Manager at the European Marine Energy Centre (EMEC), also commented on the latest Government announcement on tidal energy, stating that it was a “pivotal moment” for the sector, but adding that “It is not job done… and we are very keen to push Government even further”, referencing a 1GW target for the 2030s.

What is the opportunity for the UK in 2022?
The opportunity for the UK to lead a global tidal energy market is clear: UK waters hold roughly half of Europe’s tidal stream resource and current tidal technologies from 30 key sites could supply 6GW of power (enough to power almost 5.6 million homes). Given the tenacity and capability of the tidal industry, we can be confident the UK can now make rapid progress on the journey towards commercialisation and full-scale deployment in UK waters.

Building tidal power capacity in the Channel region of England and France is the focus of the Interreg TIGER project (Tidal Stream Industry Energiser Project) led by ORE Catapult’s Cornwall office with the participation of innovators like Orbital Marine Power and SIMEC Atlantis. Visit the project website for updates, webinars and reports throughout 2022.

Philip Archer, Head of Product Application at SIMEC Atlantis said “I’m very much looking forward to collaborating and moving this industry forward. If we all go off on our own, we won’t get very far and so as an industry we must all come together.”

John Meagher, Business Development Director of Nova Innovation, went on to say, “As we begin to secure more projects, we’re really going to be able to mass manufacture and bring those costs down.”

The exportability of these technologies is well-evidenced too: the tidal stream experts we showcased in our series reported on contract wins throughout 2020 and 2021 in locations across the world, including Indonesia, Japan, Canada and India.

And what is the opportunity for the planet?
Wind and solar power have driven us forward at an incredible pace, enabling our ambitious net-zero targets, but they are not entirely predictable. As John Meagher put it in our final debate: “Tidal can play a key role in complementing wind and solar energy due to its uniqueness of predictability”.

Tidal stream farms are already supplying homes and businesses in some parts of the UK and the electricity they produce is price competitive with diesel, which is proving a revolution for remote and island communities that often rely upon fossil fuel imports for power. By 2030, tidal energy is on track to be cheaper than both nuclear power and fossil fuels, providing clean and sustainable energy around the world.

As the Tidal Power Express came to an end on December 15, Dr Stephen Wyatt, Director of Research & Disruptive Innovation for ORE Catapult, and host of the final episode summed it up optimistically, stating he hopes “the 2020s will be the golden decade for tidal”.

In case you missed any of the series, you can catch all four episodes of the Tidal Power Express on our YouTube channel. 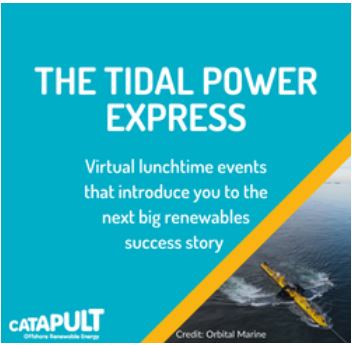 * £20 million a year ring-fenced budget for tidal stream technology, available for 15 years under the Contracts for Difference (CfD) scheme.