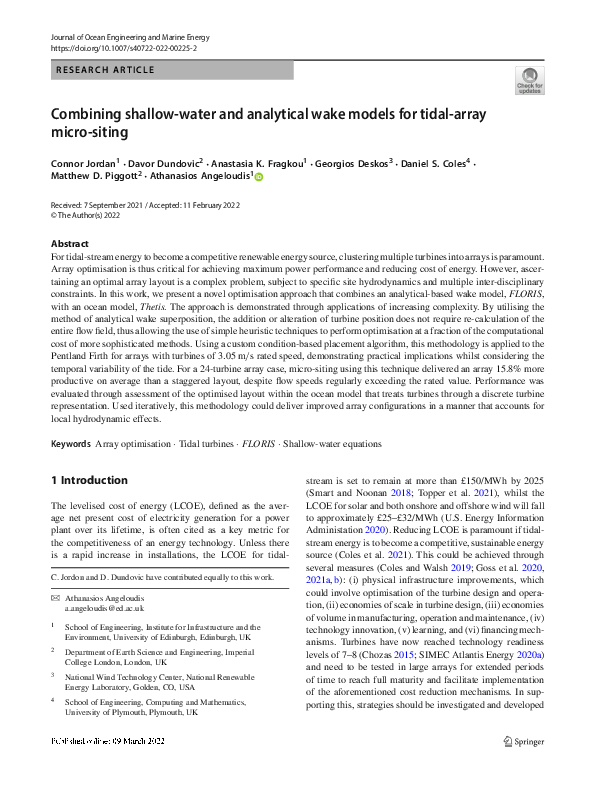 Numerical modeling of currents and waves is used throughout the marine energy industry for resource assessment. This study compared the output of numerical flow simulations run both as a standalone model and as a two-way coupled wave–current simulation. A regional coupled flow-wave model was established covering the English Channel using the Delft D-Flow 2D model coupled with a SWAN spectral wave model. Outputs were analyzed at three tidal energy sites: Alderney Race, Big Roussel (Guernsey), and PTEC (Isle of Wight). The difference in the power in the tidal flow between coupled and standalone model runs was strongly correlated to the relative direction of the waves and currents. The net difference between the coupled and standalone runs was less than 2.5%. However, when wave and current directions were aligned, the mean flow power was increased by up to 7%, whereas, when the directions were opposed, the mean flow power was reduced by as much as 9.6%. The D-Flow Flexible Mesh model incorporates the effects of waves into the flow calculations in three areas: Stokes drift, forcing by radiation stress gradients, and enhancement of the bed shear stress. Each of these mechanisms is discussed. Forcing from radiation stress gradients is shown to be the dominant mechanism affecting the flow conditions at the sites considered, primarily caused by dissipation of wave energy due to white-capping. Wave action is an important consideration at tidal energy sites. Although the net impact on the flow power was found to be small for the present sites, the effect is site specific and may be significant at sites with large wave exposure or strong asymmetry in the flow conditions and should thus be considered for detailed resource and engineering assessments.