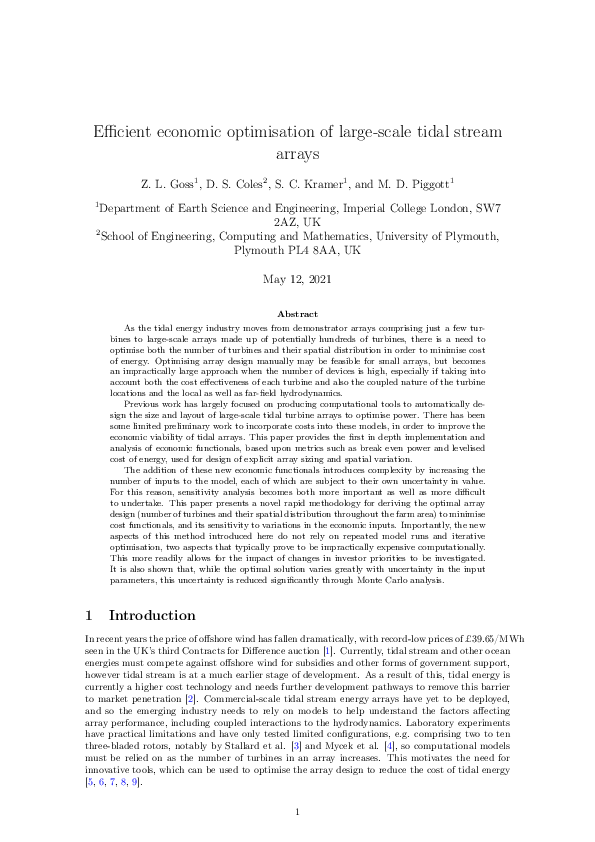 As the tidal energy industry moves from demonstrator arrays comprising just a few turbines to large-scale arrays made up of potentially hundreds of turbines, there is a need to optimise both the number of turbines and their spatial distribution in order to minimise cost of energy. Optimising array design manually may be feasible for small arrays, but becomes an impractically large approach when the number of devices is high, especially if taking into account both the cost effectiveness of each turbine and also the coupled nature of the turbinelocations and the local as well as far-field hydrodynamics.

Previous work has largely focused on producing computational tools to automatically design the size and layout of large-scale tidal turbine arrays to optimise power. There has been some limited preliminary work to incorporate costs into these models, in order to improve theeconomic viability of tidal arrays. This paper provides the first in depth implementation and analysis of economic functionals, based upon metrics such as break even power and levelised cost of energy, used for design of explicit array sizing and spatial variation.

The addition of these new economic functionals introduces complexity by increasing the number of inputs to the model, each of which are subject to their own uncertainty in value. For this reason, sensitivity analysis becomes both more important as well as more difficult to undertake. This paper presents a novel rapid methodology for deriving the optimal array design (number of turbines and their spatial distribution throughout the farm area) to minimise cost functionals, and its sensitivity to variations in the economic inputs. Importantly, the new aspects of this method introduced here do not rely on repeated model runs and iterative optimisation, two aspects that typically prove to be impractically expensive computationally. This more readily allows for the impact of changes in investor priorities to be investigated. It is also shown that, while the optimal solution varies greatly with uncertainty in the input parameters, this uncertainty is reduced significantly through Monte Carlo analysis.

The full paper can be viewed here