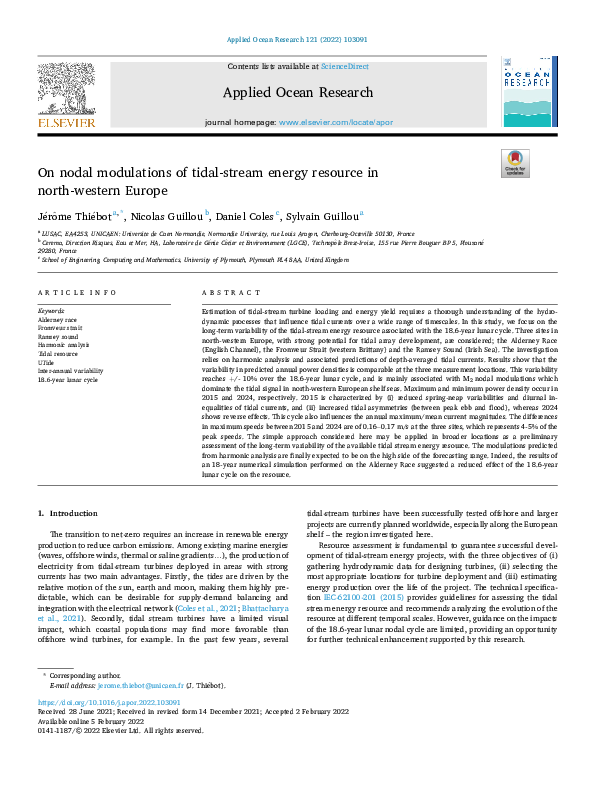 Estimation of tidal-stream turbine loading and energy yield requires a thorough understanding of the hydrodynamic processes that influence tidal currents over a wide range of timescales. In this study, we focus on the long-term variability of the tidal-stream energy resource associated with the 18.6-year lunar cycle. Three sites in north-western Europe, with strong potential for tidal array development, are considered; the Alderney Race (English Channel), the Fromveur Strait (western Brittany) and the Ramsey Sound (Irish Sea). The investigation relies on harmonic analysis and associated predictions of depth-averaged tidal currents. Results show that the variability in predicted annual power densities is comparable at the three measurement locations. This variability reaches +/- 10% over the 18.6-year lunar cycle, and is mainly associated with M2 nodal modulations which dominate the tidal signal in north-western European shelf seas. Maximum and minimum power density occur in 2015 and 2024, respectively. 2015 is characterized by (i) reduced spring-neap variabilities and diurnal inequalities of tidal currents, and (ii) increased tidal asymmetries (between peak ebb and flood), whereas 2024 shows reverse effects. This cycle also influences the annual maximum/mean current magnitudes. The differences in maximum speeds between 2015 and 2024 are of 0.16–0.17 m/s at the three sites, which represents 4-5% of the peak speeds. The simple approach considered here may be applied in broader locations as a preliminary assessment of the long-term variability of the available tidal stream energy resource. The modulations predicted from harmonic analysis are finally expected to be on the high side of the forecasting range. Indeed, the results of an 18-year numerical simulation performed on the Alderney Race suggested a reduced effect of the 18.6-year lunar cycle on the resource.