The Efficiency of a Fence of Tidal Turbines in the Alderney.pdf 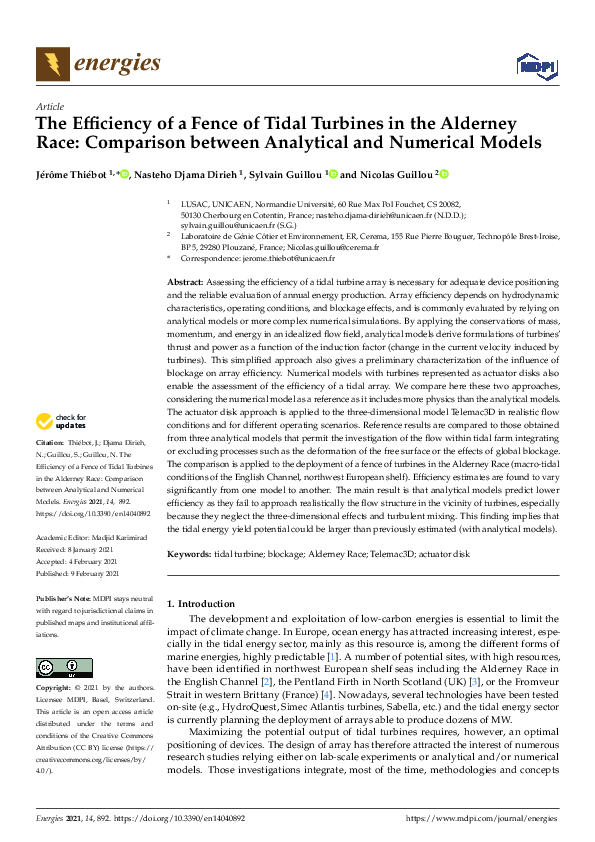 Assessing the efficiency of a tidal turbine array is necessary for adequate device positioning and the reliable evaluation of annual energy production. Array efficiency depends on hydrodynamic characteristics, operating conditions, and blockage effects, and is commonly evaluated by relying on analytical models or more complex numerical simulations. By applying the conservations of mass, momentum, and energy in an idealized flow field, analytical models derive formulations of turbines’ thrust and power as a function of the induction factor (change in the current velocity induced by turbines). This simplified approach also gives a preliminary characterization of the influence of blockage on array efficiency. Numerical models with turbines represented as actuator disks also enable the assessment of the efficiency of a tidal array. We compare here these two approaches, considering the numerical model as a reference as it includes more physics than the analytical models. The actuator disk approach is applied to the three-dimensional model Telemac3D in realistic flow conditions and for different operating scenarios. Reference results are compared to those obtained from three analytical models that permit the investigation of the flow within tidal farm integrating or excluding processes such as the deformation of the free surface or the effects of global blockage. The comparison is applied to the deployment of a fence of turbines in the Alderney Race (macro-tidal conditions of the English Channel, northwest European shelf). Efficiency estimates are found to vary significantly from one model to another. The main result is that analytical models predict lower efficiency as they fail to approach realistically the flow structure in the vicinity of turbines, especially because they neglect the three-dimensional effects and turbulent mixing. This finding implies that the tidal energy yield potential could be larger than previously estimated (with analytical models).