Blockage Corrections for Tidal Turbines—Application to an Array of Turbines in the Alderney Race.pdf 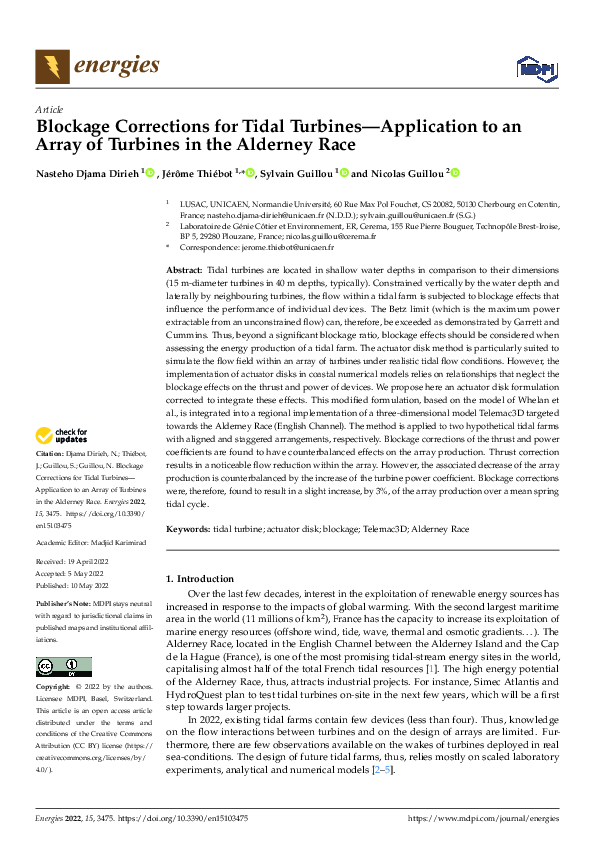 Tidal turbines are located in shallow water depths in comparison to their dimensions (15 m-diameter turbines in 40 m depths, typically). Constrained vertically by the water depth and laterally by neighbouring turbines, the flow within a tidal farm is subjected to blockage effects that influence the performance of individual devices. The Betz limit (which is the maximum power extractable from an unconstrained flow) can, therefore, be exceeded as demonstrated by Garrett and Cummins. Thus, beyond a significant blockage ratio, blockage effects should be considered when assessing the energy production of a tidal farm. The actuator disk method is particularly suited to simulate the flow field within an array of turbines under realistic tidal flow conditions. However, the implementation of actuator disks in coastal numerical models relies on relationships that neglect the blockage effects on the thrust and power of devices. We propose here an actuator disk formulation corrected to integrate these effects. This modified formulation, based on the model of Whelan et al., is integrated into a regional implementation of a three-dimensional model Telemac3D targeted towards the Alderney Race (English Channel). The method is applied to two hypothetical tidal farms with aligned and staggered arrangements, respectively. Blockage corrections of the thrust and power coefficients are found to have counterbalanced effects on the array production. Thrust correction results in a noticeable flow reduction within the array. However, the associated decrease of the array production is counterbalanced by the increase of the turbine power coefficient. Blockage corrections were, therefore, found to result in a slight increase, by 3%, of the array production over a mean spring tidal cycle.