This educational video will help you understand tidal stream energy, including the science, the technology, and how tidal turbines are tested, along with examples of world leaders in tidal energy and the technology they have developed, including Orbital Marine Power, Minesto, QED Naval, Hydroquest, and SIMEC Atlantis Energy.

Tidal streams are created by the constantly changing gravitational pull of the moon and sun on the world’s oceans. Tides never stop, with water moving first one way, then the other, the world over. Tidal stream technologies capture the kinetic energy of the currents flowing in and out of the tidal areas. Since the relative positions of the sun and moon can be predicted with complete accuracy, so can the resultant tide. It is this predictability that makes tidal energy such a valuable resource.

Tidal stream resources are generally largest in areas where a good tidal range exists, and where the speed of the currents are amplified by the funnelling effect of the local coastline and seabed, for example, in narrow straits and inlets, around headlands, and in channels between islands. 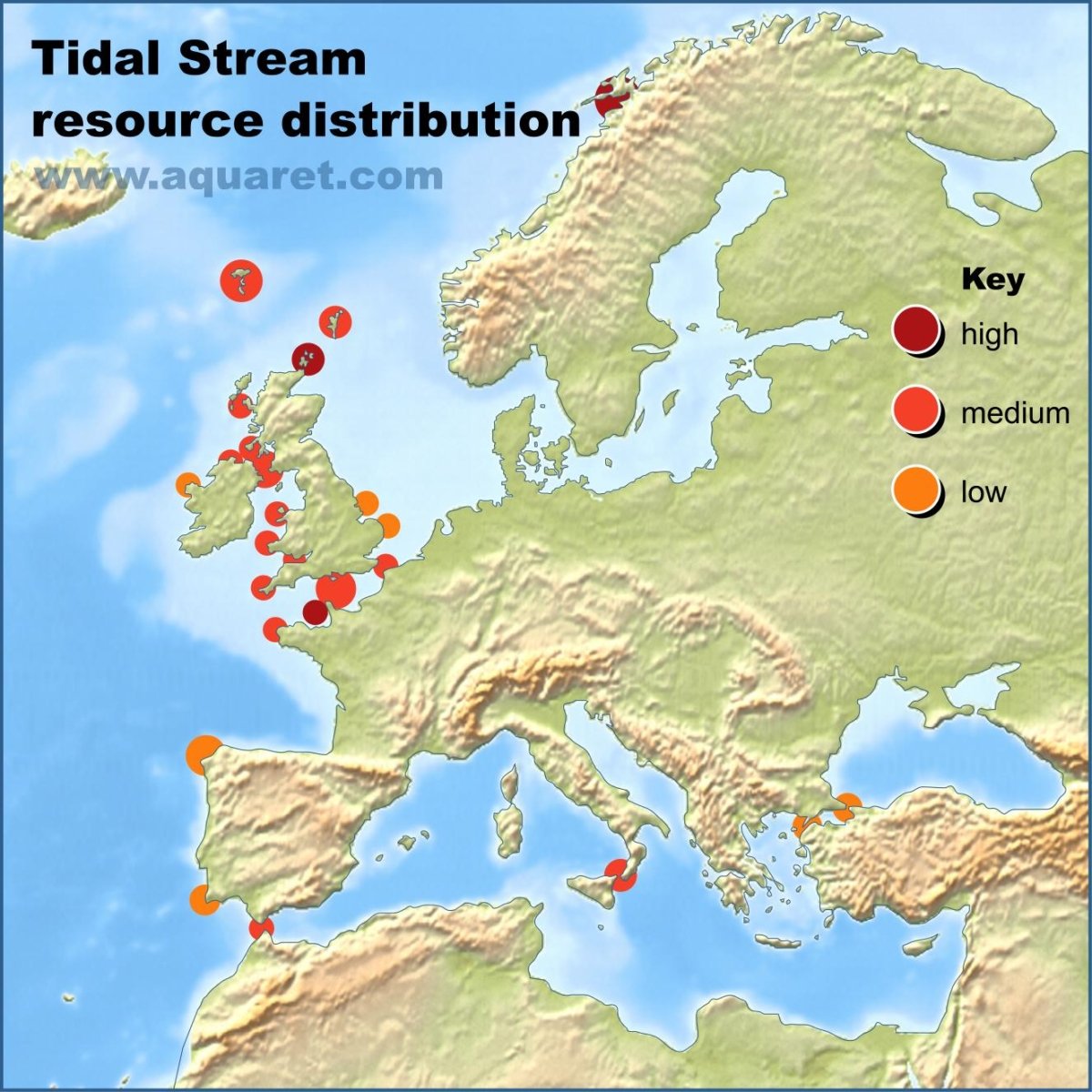 Technology to harness the tides

Tidal turbines are similar to wind turbines in that they have blades that turn a rotor to power a generator. The turbine is placed underneath the water where there is strong tidal flow.

Because water is about 800 times denser than air, tidal turbines have to be much tougher than wind turbines. Tidal turbines are best located in areas of the world that have a strong tidal flow.

Tidal turbine designs can differ depending on how they are positioned underwater. The turbine could be suspended beneath a platform floating on the surface of the water. Fixed to a tower or monopile on the seabed and either held in place by heavy weights or the tower or monopile sits cemented into a predrilled hole in the seabed. The tidal stream device is then finally, suspended in the water column often requiring specialist marine contractors capable of accessing the site and lifting and positioning potentially heavy structures at sea.

Regardless of the design, installing a tidal turbine will follow the same general process. Firstly site inspection, seabed survey and environmental analysis is carried out to understand seabed and tidal resource conditions. Following this anchoring points for floating systems are installed and gravity base or monopile/towers are then put into place for fixed bottom designs. The turbine nacelle (the centre of the turbine) is prepared on shore, is tested and commissioned and then its blades are added. The turbine will then be taken to site and fitted to the foundations, often using Remote Underwater Vehicles (ROVs) to provide crew on a support vessel with visibility of the underwater activity. 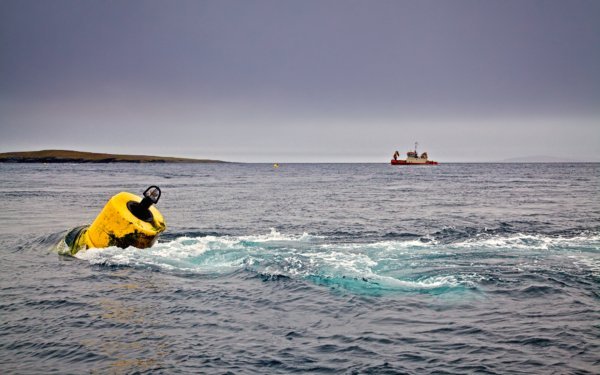 How are tidal turbines tested?

At the early design stage, test tanks, such as those at Plymouth University’s COAST Laboratory and Centrale Nante’s LHEEA Laboratory, are used to prove basic principles of operation and to understand performance characteristics.

It’s very important that tidal components and the complete tidal turbine system are thoroughly tested before going into the water for the first time. In the UK, the Offshore Renewable Energy Catapult manages a range of specialist test equipment at its test centre in Blyth to test turbine components and complete turbines. At Blyth turbines can be run for the equivalent of many years, this is called accelerated life testing, and helps to uncover weaknesses and highlight potential system failures.

In France, facilities such as the French Institute for Marine Research IFREMER test laboratory in Boulogne-sur-Mer make it possible to carry out tests on a reduced scale.

Once the turbine has been tested on land it can be tested in at-sea test facilities, such as the European Marine Energy Centre (EMEC) in Orkney, or the Paimpol-Bréhat tidal turbine test site in Brittany. These two open-air test laboratories provide developers of tidal turbine technologies with purpose-built, accredited open-sea testing facilities, making it possible for independent organisations to certify the tests.

EMEC operates two separate tidal test sites in the waters around Orkney. At the full scale test site at Fall of Warness, subsea cables run from each test berth at sea to a substation onshore where electricity generated at the site can then be fed into the UK national grid.

Paimpol-Bréhat has only one berth connected to the national grid, located 15km from the coast and at a depth of 35m, in a demanding environment (strong currents, exposure to the swell, distance from the coast). 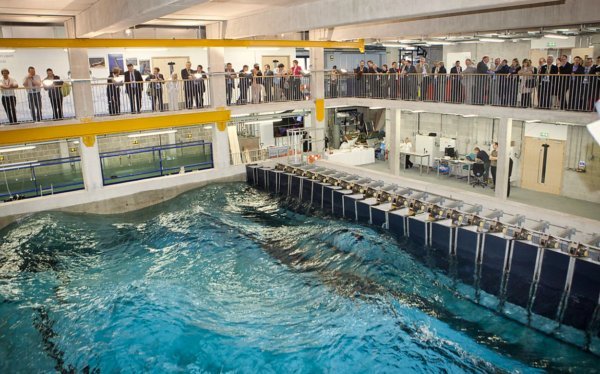 The COAST Laboratory at the University of Plymouth (Credit: UoP) 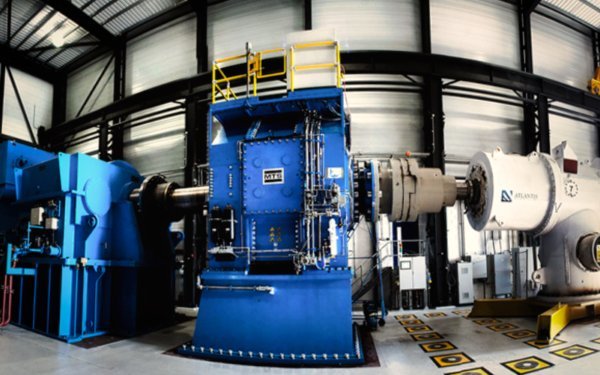 Many companies are working hard to develop new improved tidal turbine designs. They are supported by leading universities that carry out specialist research to better understand the potential energy held in tidal flows and, improve understanding of tidal turbine performance and organisations such as ORE Catapult and EMEC that help improve the testing and performance of tidal turbines.

As with all new technologies the best way to develop and improve is by building and testing your design. Doing this can be expensive particularly for offshore renewables where devices must be commercially demonstrated at sea. Often technology developers will build scale models of their technologies to fully understand how it operates and behaves before building a sea going larger scale demonstrator at significant cost. TIGER is supporting five different tidal stream concepts, some competing with each other and some looking to access niche parts of the tidal stream market.

ORE Catapult assessed the state of the tidal stream sector and published findings in their 2018 Tidal Stream and Wave Energy Cost Reduction and Industrial Benefit report. It found that the tidal stream has potential to reach LCOE of £150 per MWh by 100MW installed (we have currently installed around 10MW), reducing to £90 per MWh by 1GW and £80 per MWh by 2GW – that’s cheaper than nuclear. Further reductions are possible with additional focus on innovation and continued reductions in cost of capital towards levels coming through in offshore wind. Significant cost reductions are expected in the near-term as the industry takes the step from pre-commercial arrays to commercial projects. TIGER will re-assess the tidal sector and refresh the wave and tidal cost reduction report. 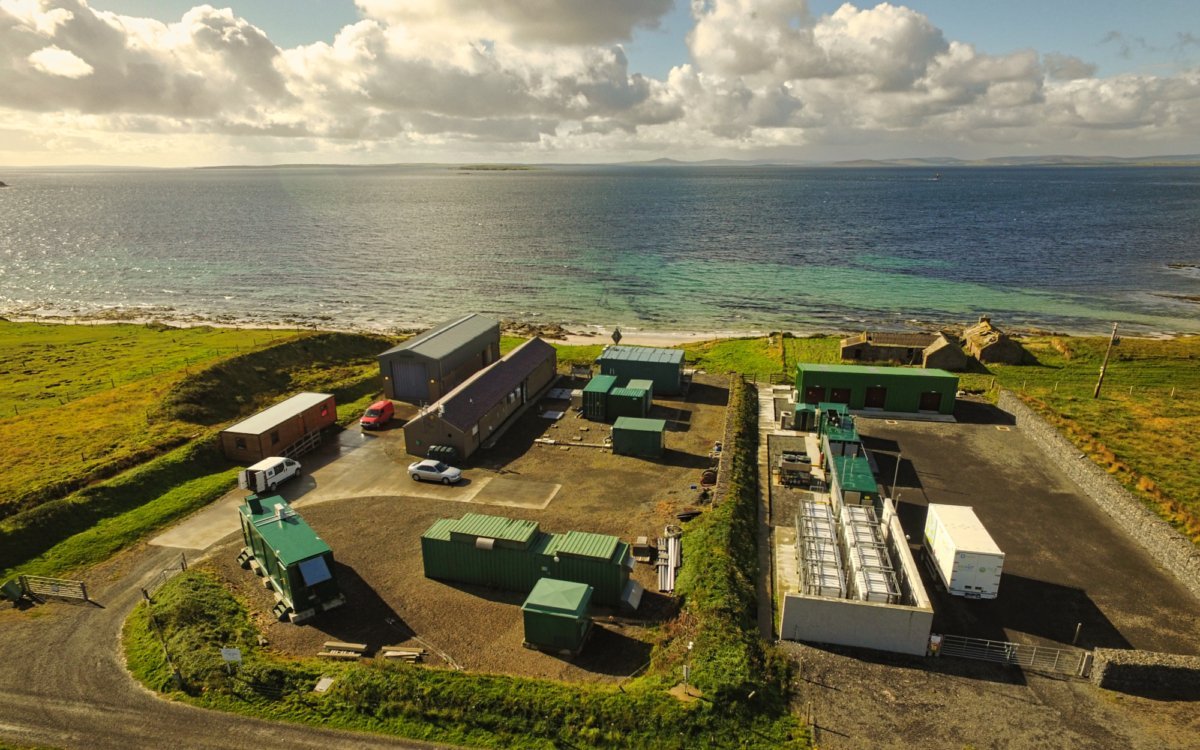