What is Levelised Cost of Energy (LCoE)?

Why is a revenue subsidy required for tidal stream technologies?

A revenue subsidy is a ‘top up’ payment for any electricity supplied to grid by an approved developing renewable energy technology where the cost of producing that power is greater than the market price. This top up is capped by a defined strike price specific to that technology. Without revenue support, there would be little motivation for investment and development of decarbonising renewable energy technologies and their associated supply chains. From a taxpayer’s perspective any revenue subsidy should be considered an investment for establishing and growing a high potential new industry, creating jobs, and boosting GvA which ultimately should more than repay that ‘investment’ back.

In comparison to other renewable energy technologies such as solar PV and wind, tidal stream technology is still at a relatively early stage of development and demonstration. This means there are a greater number of differing tidal technologies in development at smaller scales (in terms of power output per device) and deployed and tested in small numbers (it is logical to prove an individual prototype first prior to building multiples of them) which makes for a more costly technology early on in the development process. This was also the case for wind and solar technologies who have since come down the cost reduction curve by standardising the technology design (all wind turbines now look very similar), increasing the economies of scale for individual turbines (eg. 15MW single wind turbines have now been deployed), and increasing the number of devices within a single project (economies of volume), not to mention increased market confidence of investor and finance communities in the performance and reliability of the technology, which in-turn unlocked access to cheaper finance. These technologies have only been able to develop as rapidly and efficiently as they have because they too received revenue subsidies in their early development stages. The tidal stream industry’s requirement for a subsidy is no different.

The technology has reached a point of operational reliability and survivability, eg. MeyGen (SIMEC Atlantis turbines), Orbital Marine Power, SME in Canada and Tocardo turbines. These examples of installed tidal technology have reached a state of continuous operation and approaching a normalised operations and maintenance schedule. The next phase is to further demonstrate performance and reliability in a commercial project. 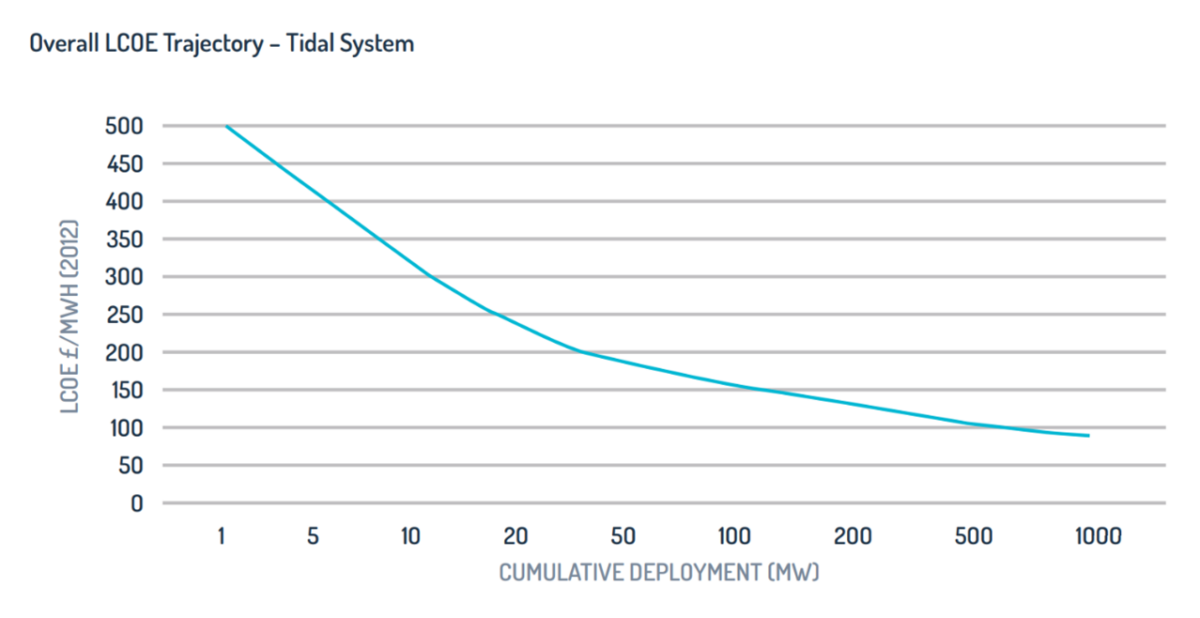 How is the tidal sector proposing it should be supported?

Focus on the approach adopted in the UK

TIGER together with its partners, stakeholders and wider industry will gather the evidence of tidal stream technology cost reduction. Working closely with the Marine Energy Council, TIGER will provide Governments with the growing volume of evidence that tidal stream energy can form an important part of future decarbonised electricity generation systems.

As explained previously, it is crucial that access to a suitable revenue subsidy system (which only pays on electricity exported into the grid and not failing technologies). The UK’s current revenue system is called ‘Contracts for Difference’ (CfD). Allocation rounds are held where technologies must bid against each other for revenue support. This competition ensures only the most financially competitive technologies and projects are successful at the lowest possible cost to consumers. Tidal stream technology sits within pot 2 of the CfD and must compete with other ‘less established’ technologies for a subsidy. To date this has meant relatively immature tidal technologies have been competing against much more mature technologies including offshore wind and in effect has been unable to secure crucial CfD revenue support. A recent public consultation has led BEIS to move fixed offshore wind into a separate CfD pot, with less developed floating offshore wind remaining in pot 2 with tidal stream. To give both the tidal sector and its potential investors confidence in the market, a ring fence of 100MW installed capacity supported at a strike price of £250/MWh for tidal within pot 2 is being proposed. This will guarantee that at least 100MW of tidal stream technology will access support and be able to deploy and demonstrate technology and continue in learning and reducing costs so that in future tidal becomes competitive within the CfD Pot 2 without a ringfence.

To learn more about the marine energy sector and its efforts to convince Governments for support in both the UK and in France, please visit the Marine Energy Council (MEC) website and the Syndicat des énergies renouvelables (SER) website.