Identifying economically viable tidal sites within the Alderney Race through optimization of levelized cost of energy.pdf 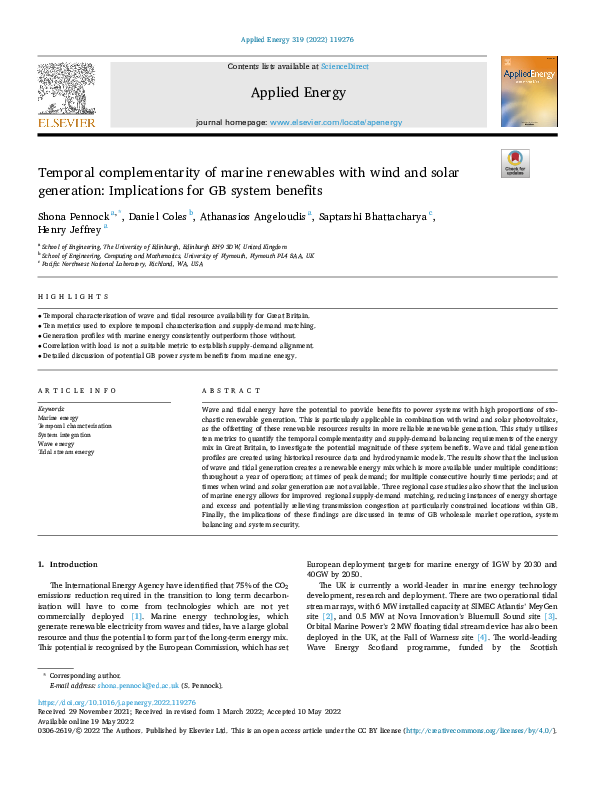 Costs of tidal stream energy generation are anticipated to fall considerably with array expansion and time. This is due to both economies of volume, where arrays comprising of large numbers of turbines can split fixed costs over a greater number of devices, and learning rates, where the industry matures and so arrays of the same size become cheaper due to lessons learned from previous installations. This paper investigates how tidal energy arrays can be designed to minimize the levelized cost of energy (LCOE), by optimizing not only the location but also the number of devices, to find a suitable balance between decreased costs due to economies of volume and diminishing returns due to global blockage effects. It focuses on the Alderney Race as a case study site due to the high velocities found there, making it a highly suitable site for large-scale arrays. It is demonstrated that between 1 and 2 GW could be feasibly extracted as costs in the tidal industry fall, with the LCOE depending greatly on the assumed costs. A Monte–Carlo analysis is undertaken to account for variability in capital and operational cost data used as inputs to the array optimization. Once optimized, the estimated P50 LCOE of an 80 MW array is £110/MWh. This estimate aligns closely with the level of subsidy considered for tidal stream projects in the Alderney Race in the past.