Research paper: The impact of the seabed morphology on turbulence generation in a strong tidal stream

Research paper: The impact of the seabed morphology on turbulence generation in a strong tidal stream 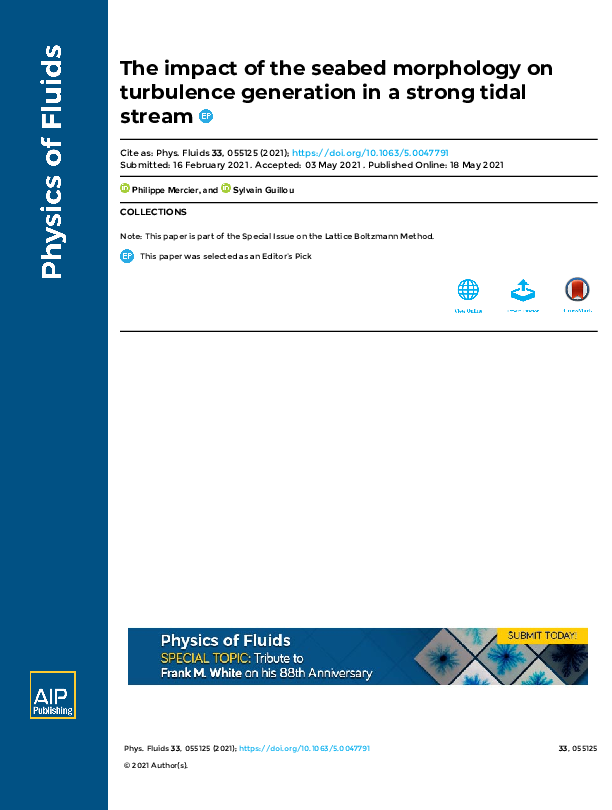 Highly energetic turbulent flow structures are observed in strong tidal flows. If they are suspected to result from interactions between the flow and the seabed morphology, the physical processes involved in their generation, as well as their impact on the structure of the flow, are not yet fully understood. Here, the lattice-Boltzmann method is used to simulate a strong tidal flow in large-eddy simulation. The effect of the seabed morphology on the hydrodynamic characteristics of the flow is studied. A high spatial variability of the turbulent kinetic energy
(TKE) production is observed. The flow average velocity is significantly reduced in areas of high TKE production. These areas are not necessarily associated with the largest seabed landforms. However, some seabed landforms of specific shapes are identified as turbulence generators. The areas of high turbulence are associated with trails of vortices successively released from the seabed and following similar trajectories. The generation of a large coherent flow structure is observed at the intersection of two vortex trails, suggesting that such a structure, that could be identified as the large boils commonly observed at the surface of strong tidal power flows, could result from the aggregation of smaller vortices.